One of the best tools for data science is clustering, where groupings of datapoints are revealed just by calculating their similarity to others. This article introduces k-means clustering for data analysis in R, using features from an open dataset calculated in an earlier article.

From features to diagnosis

The goal of this analysis is to diagnose the state of health of four bearings. These bearings were run from installation until an end-of-life point, and accelerometer data was captured throughout. At the end of the experiment, inspection showed that two bearings had failed: b3 with an inner race defect, and b4 with a rolling element failure. Through feature extraction and dimensionality reduction, I identified 14 features which contain rich information about bearing health. It also looked like b1 and b2 were on the point of failure when the experiment ended.

Visual inspection of these features allowed me to identify the points at which it looked like bearing health was changing, and therefore put labels on each datapoint. The labels are shown for two features below, colour-coded as: 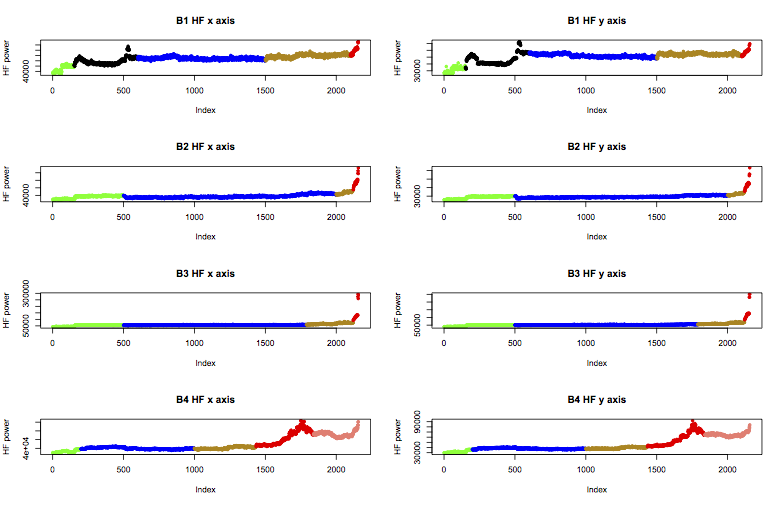 If you followed the last article, you can read in the features and labels with this code:

Otherwise, download and run the code from GitHub, before running the snippet above.

Before I train a classifier to automatically diagnose bearing health, I want to check that the labels I previously assigned to the data have some validity. Humans are very good at pattern-matching, but sometimes assign a pattern when none exists. In particular, I want to see if the “unknown” datapoints are really a separate class, or whether they should be considered normal, suspect, or something else. Secondly, I want to know if “failure.b1” or “failure.b2” are similar to the other failure modes, or whether they should be kept separate. Overall, I want to see if any of my labels should be merged, or separated into multiple groupings.

The algorithm I’ll use for this is k-means. This is an unsupervised learning technique, which means it reveals underlying structure in the data without being told the labels I’ve assigned. In contrast, a supervised learning technique like a neural network uses the labels to check how well it’s learned the groupings, which is great when you’re sure of your class labels. In this case, I want to check how appropriate my labels are, so an unsupervised technique is better.

Cluster analysis assumes that the data clearly changes when the bearing passes from one state of health to another. This could be as simple as a single parameter showing a step change, so that all the data relating to the previous state is below a critical threshold, while all the data from the new state is above the threshold. Clustering would highlight this relationship, and identify the threshold separating the two clusters.

K-means works by separating the training data into k clusters. It calculates the centre point (mean) of each cluster, giving k means. New datapoints are clustered based on their distance to all the cluster centres: the nearest cluster is considered the most similar and best fit. Some good examples of the k-means learning process are given here.

While k-means is unsupervised, it does need to know how many clusters the data scientist expects to find in the data. Usually, k is chosen to be close to the number of labels, but it’s very difficult to pick the best number without trying out a few different values.

For the bearing data, I’m fairly sure of six labels (early, normal, suspect, failure.inner, failure.roller, and stage2). The other three (unknown, failure.b1, and failure.b2) could be alternative names for some of these. Therefore, the minimum number of clusters I’m reasonably expecting is six.

On the other hand, sometimes a behaviour will manifest in more than one way. Normal behaviour for b3 looks somewhat different from normal for b4, so it could be that the normal label should apply to more than one cluster. Since I have nine labels in total, I’ll double this to 18 for an upper bound on k.

If I’m going to try every k from 6 to 18, I don’t want to do all the analysis manually. I need a way of calculating goodness of fit of the model, so I can work out which value of k fits the data best. To do this, I need some way of calculating how consistently datapoints with the same label are clustered together.

The first step is to train a model on the data, excluding columns 1 and 2 for the bearing and state labels:

This returns a kmeans object, which includes a cluster parameter. This lists the cluster number allocated to every datapoint in the input dataset. From this, I can calculate a table of labels versus cluster numbers, to reveal the spread:

This shows that data with the early label is split quite evenly across clusters 2, 3, 4, 6, and 7, whereas failure.b1 is confined to cluster 1. Looking at columns instead of rows, cluster 7 contains only early data, but cluster 1 contains many different labels. This is indicative of accuracy, but it’s hard to draw conclusions—partly because there are such uneven numbers of datapoints with each label. I’ll convert each row to percentages, and wrap the whole thing as a function:

Next, I need to assign labels to the clusters, which I’ll do as a two stage process. First, every cluster should have a label. For every cluster, I’ll look down its column and pick the label that has the highest percentage of datapoints assigned to it. Note that this can result in two or more clusters having the same label, as in clusters 3 and 7 above which both have “early” as the highest percentage label.

For step 2, every label should be associated with at least one cluster, otherwise k-means will never be able to diagnose that label. For every label which isn’t already assigned to a cluster, I’ll look along its row and assign it to the cluster that the majority of its datapoints are assigned to. This can result in a cluster having more than one label associated with it.

These two functions can be used together, and the resulting list of cluster labels visualised:

In this case, cluster 1 represents three of the failure classes as well as “suspect”, while clusters 3, 6, and 7 contain “early” data.

All that remains is to test for multiple values of k in the range six to 18:

Since k-means randomly picks the starting cluster centres, subsequent runs can give very different results. This loop can be run a few times to generate more than one model for each value of k.

After training lots of models, I want to find the best one and inspect it. The results matrix holds the accuracy values, so the best one can be found, extracted, and saved for later:

First, I’ll pull out some key information like the number of clusters and accuracy:

After a few runs, this was the best model I found:

This means that based on the automatic assignment of labels to clusters, 61% of the data fell into a cluster with its assigned label. It also suggests that suspect behaviour looks a lot like the b1 failure, and also the failure of the rolling element in b4 (since cluster 11 has all these labels).

Next, I’ll plot the four bearings sequentially (as in the feature plots above), but showing how the data moves between clusters as the experiment progresses. The colours are matched to the labels as before: 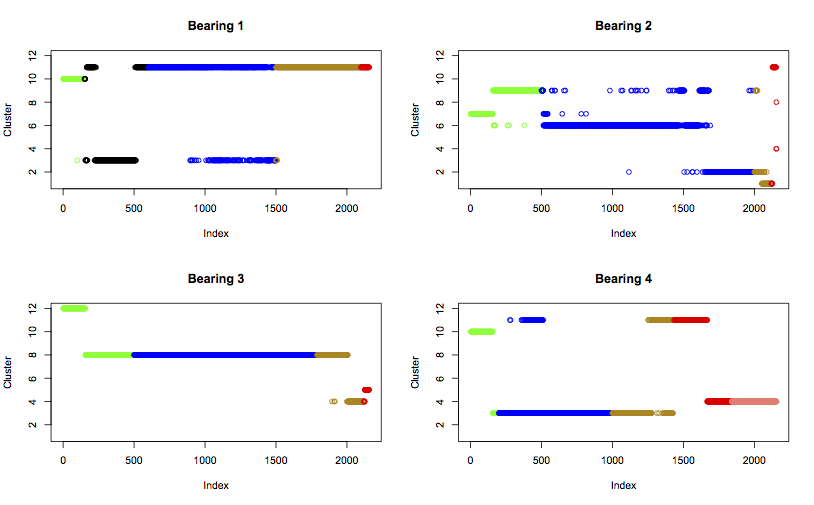 The plot can now be compared with the assigned cluster labels:

Interestingly, what is considered normal is different for each bearing, as they all fall into different clusters. The expection to this is a few of b1’s normal points falling into the same cluster as b4’s normal (cluster 3). Also, the early run-in behaviour of b1 and b4 are clustered together, both falling into cluster 10. Therefore, bearings 1 and 4 can be considered quite similar.

Bearing 2 displays some erratic behaviour, bouncing between two or three clusters for most of its life. But right at the end of the experiment it moves into clusters which it hadn’t touched before, which strengthens the argument that it had reached the point of failure. Bearing 3 is much more steady throughout its life, but this only makes the failure clearer as it moves to clusters 4 and 5.

One final visualisation is to look at the cluster centres in feature space for all bearings. Since the feature vector has 14 dimensions this can be challenging, but one way is to view the means in 2-dimensional slices. These plots show the labelled data using the same colours as before, with the cluster centres superimposed in black: 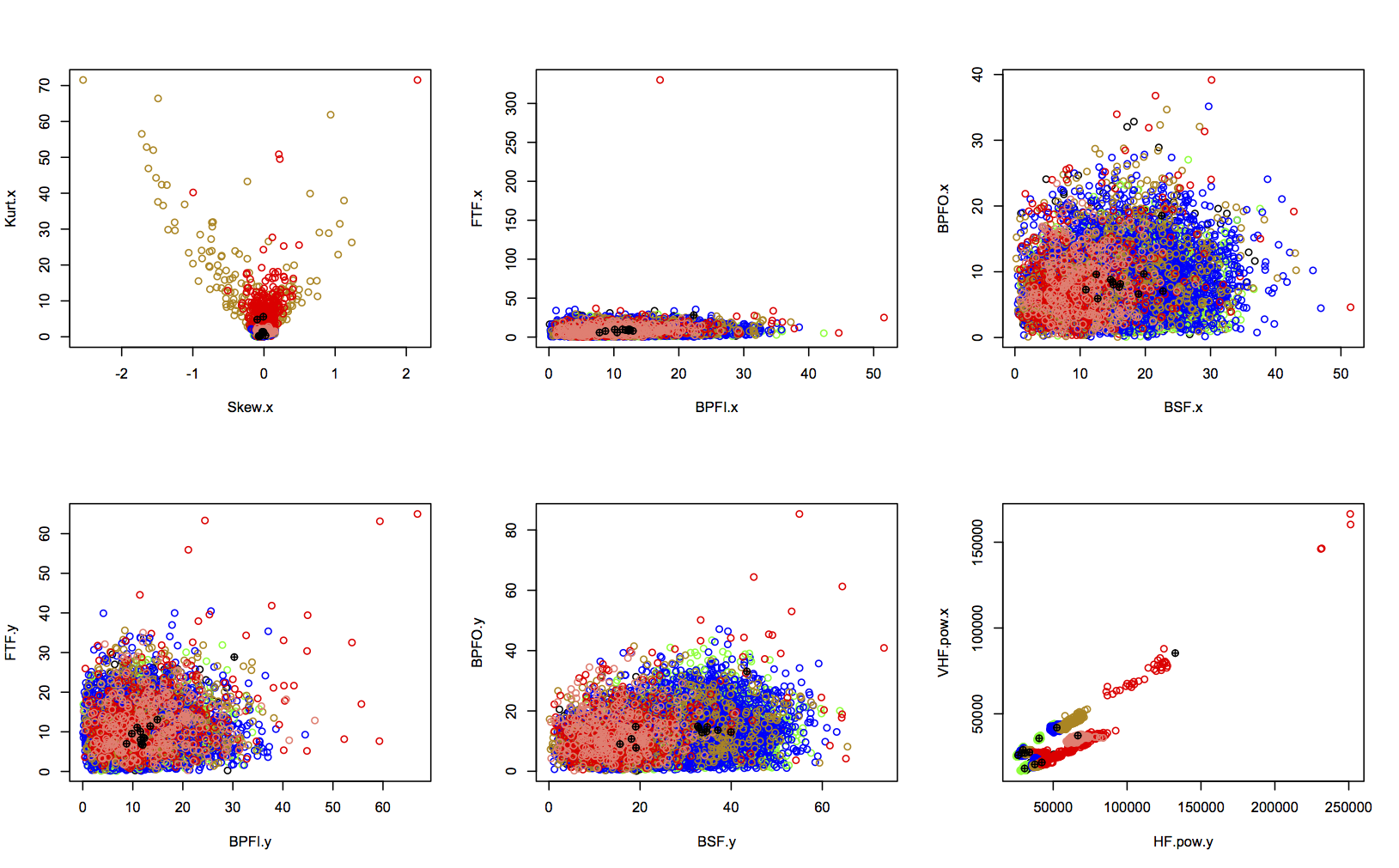 In this case the plot is not very informative, since the 2-d slices don’t convey spatial relationship very well!

To sum up, the labels I previously assigned to the data seem to be a relatively good fit for the clusters found through unsupervised mining of the data. I can use these results to adjust the labels for a better fit, specifically:

To take this work further, I would next aim to train a diagnostic classifier using supervised learning. Now that k-means has given validity to the visually-chosen labels, I can be more confident that a classifier will learn patterns in the data well.